Developers See Potential in Former Shopping Sites Across the U.S. 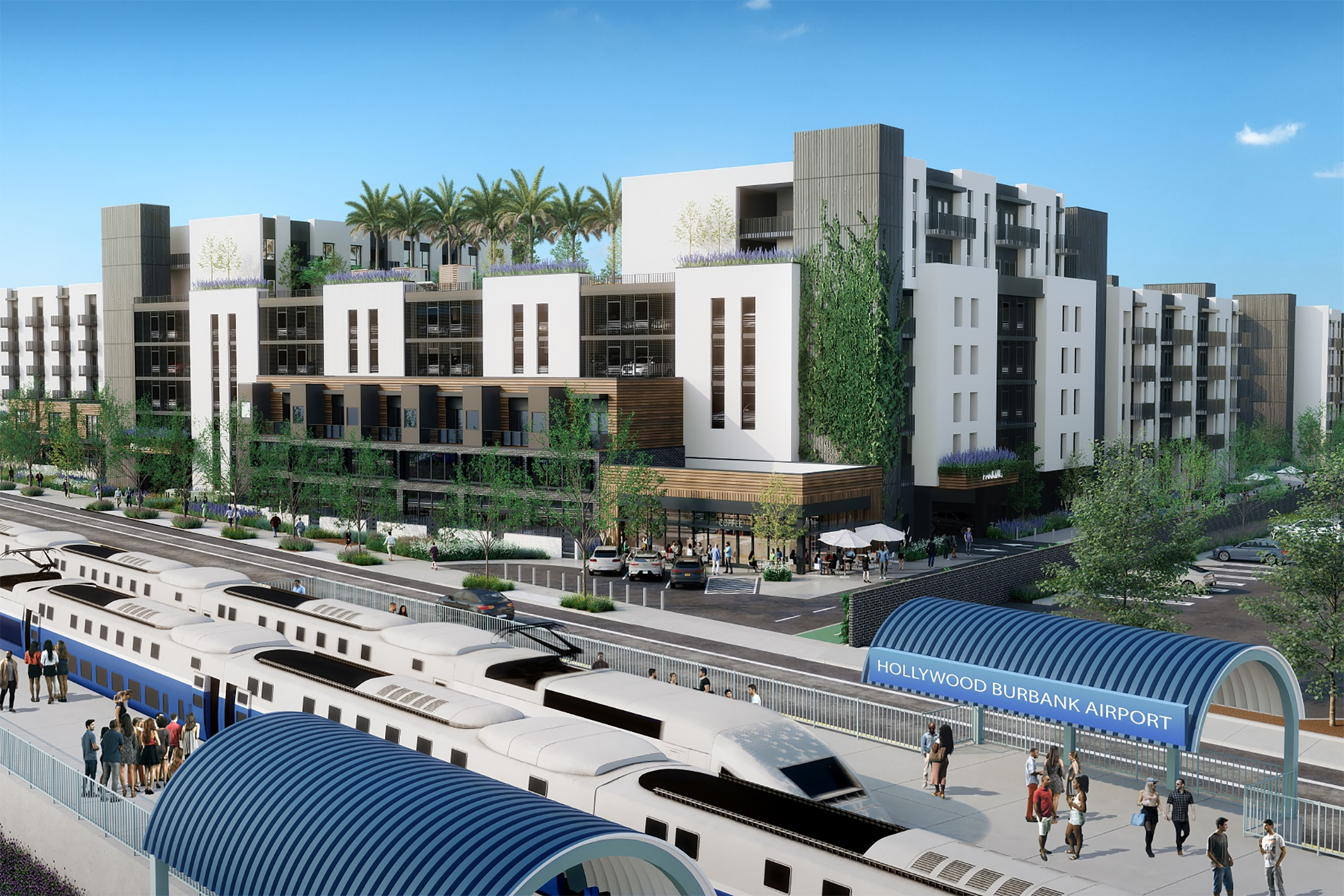 More than 850 apartments are planned at 2311 N. Hollywood Way in Burbank, California, on a 10-acre site that was once home to a massive electronics retailer. (LaTerra Development)

When the world locked down in early 2020 to curb the spread of the coronavirus, the disruption gave fresh impetus to efforts by Chris Tourtellotte and his father, Charlie, to secure a lender for a massive redevelopment project they had planned in Burbank, California.

The pair, who run Los Angeles real estate firm LaTerra Development, had ambitious plans to transform a former Fry's Electronics store into a 10-acre mixed-use center with more than 850 apartments and 150,000 square feet of office space along with restaurants and parking.

They found financial backing in the form of Priyesh Bhakta, president of L.A. private lender Hankey Capital. Despite the economic uncertainty, Hankey Capital agreed to lend on the project.

The Tourtellottes are now gearing up to start construction in the fall on one of the biggest apartment construction endeavors in greater Los Angeles. The roughly $450 million project joins a wave of retail-to-residential conversions across the country as investors look to breathe new, profitable life into underperforming properties.

Nationally, there may be 20% more retail space than currently needed, fueling the apartment conversion trend, according to Richard Green, director of the University of Southern California Lusk Center for Real Estate.

"The land value of apartments has exceeded the land value for retail," he said. "Economically, it's a more effective way to use the land."

These transitions have a long history, but the pandemic has sped the transformation of the retail landscape by driving consumers to online retailers and away from certain brick-and-mortar shopping, particularly large enclosed malls, and the volume and scope of retail-to-apartment conversions appears to have ticked up.

In the Seattle suburb of Lynnwood, a Sears store was knocked down to make way for a 328-unit luxury apartment complex called Avalon Apartments, which opened in 2021. In South Jersey, around 1,000 apartments are planned to be built at the Moorestown Mall as part of a broader construction effort to breathe new life into the retail property, according to the Philadelphia Inquirer. Closer to L.A., in Orange County a developer wants to convert the aging, nearly 675,000-square-foot Laguna Hills Mall into 1,500 apartments, as much as 465,000 square feet of offices, roughly 250,000 square feet of retail and a hotel with as many as 150 rooms, according to previous CoStar reporting.

These conversions come as some physical retail, mostly serving dry goods, has suffered in the past two decades while demand for housing keeps rising.

Even before the pandemic, it was widely acknowledged the U.S. had built too much retail real estate, and the nation may have to slash as much as 1.1 billion square feet from its retail inventory to return to past levels of in-store sales productivity, according to CoStar research.

That overbuilding, coupled with severe housing shortages in many cities, makes retail-to-apartment deals increasingly common. Hankey Capital's Priyesh said his company frequently lends on deals similar to the Burbank Fry's redevelopment. It now has more than $200 million in land loans in Southern California.

For LaTerra, the $450 million Fry's redevelopment is the largest of a string of smaller retail-to-apartment projects in greater Los Angeles the developer is tackling.

"It's a function of what's the highest-and-best use, and many cases that's not retail," Chris Tourtellotte said. "The pandemic has accelerated that trend. Urban, infill retail is struggling more now."

Los Angeles appears to be a hotbed of the activity, spurred in large part by a severe shortage of housing, especially at the less expensive end of the market. With more then 10 million residents, the county is the largest in the nation, and it needs to add more than 800,000 housing units by October 2029 to meet the goals of the state-mandated Regional Housing Needs Assessment that requires cities and counties to plan for population growth.

There are a lot of retail sites from which to choose. Rand Corp., a nonpartisan Santa Monica, California-based policy think tank, found 2,300 potentially underutilized Los Angeles County commercial properties, including retail, office, hotels and motels, that could be repurposed to produce between 72,000 and 113,000 housing units in L.A. County, according to a study released April 6. Those housing units add up to about 9% to 14% of the total of what L.A. County needs to produce to meet its Regional Housing Needs Assessment goals.

That stock of "underutilized" property arises even as L.A.'s retail market is contracting. Retail inventory fell more than 570,000 square feet year over year as of April 7, a figure that may shrink in the coming months and years, according to CoStar data.

A mere 4% of retail supply was added between 2010 and 2020 across the U.S., according to CBRE, showing how selective developers have become with building brick-and-mortar shopping centers.

Beyond L.A., cities including Philadelphia, Seattle, San Jose, Minneapolis and Detroit have all seen retail inventories shrink in the past year as total U.S. retail inventory expanded by a minuscule 0.2% as of April 8, according to CoStar data. A mere 44 million square feet of retail space was built in 2021, the lowest annual total recorded in over 15 years.

Meanwhile, roughly 378,000 apartments were added year over year in the U.S., a 2.1% inventory growth as of April 8, according to CoStar data.

Among the conversion projects underway or about to launch in the Los Angeles region is another former Fry's Electronics site at 6100 Canoga Ave. in the Los Angeles neighborhood of Woodland Hills, which is slated to be redeveloped into 880 apartments. The 34-acre Westfield Promenade, a dead mall, is expected to become apartments, a Los Angeles Rams practice facility and more.

In November, Canadian developer Onni Group bought three properties with a combined 68,000 square feet of retail space for $68 million in Long Beach, Los Angeles County's second-largest city, to convert the real estate into apartments. And this month, developers revealed plans to redevelop a retail center near the desirable Beverly Hills and West Hollywood markets into a mix of uses, including more than 100 luxury rental residential units.

Earlier this year, Los Angeles developer Balboa Retail Partners met with residents of the city of Santa Monica to discuss its plans to redevelop the 60,000-square-foot Lincoln Center retail property with 521 apartments and 36,000 square feet of retail, including a grocery store.

"Like many retail shopping centers today, there's a great opportunity to modernize the retail, rightsize the retail and provide a better environment for the community we're already in," Alison Warner, senior vice president of Balboa Retail Partners, said in a recorded Jan. 11 community meeting. "We also have the unique opportunity to add much-needed housing."

USC's Green said there may be a causal relationship between retail space shrinking in some places and the growing number of apartment units.

Fry's Electronics sold appliances and computer parts in Burbank starting in 1995 before closing in 2021. LaTerra Development plans a mixed-use residential project on the site. (CoStar)

The original article can be viewed here.