Rents across the region have seen their biggest one-year gain in at least 10 years. 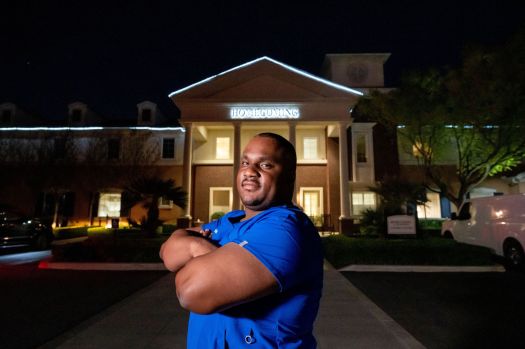 Randy Furbush, 24, at his one-bedroom apartment at Homecoming at the Preserve in Chino on Tuesday, Feb. 8, 2022. Furbush has recently moved into his apartment in Chino after failing to find affordable housing in Orange County where he works in healthcare. (Photo by Watchara Phomicinda, The Press-Enterprise/SCNG)

After three months of searching in vain for a place to rent, Penny Friesz jumped at the chance to lease a small, dilapidated duplex in Huntington Beach that needs a refrigerator, washer and dryer, yard work and new paint for the fence.

“It’s a mess. It’s seriously a mess,” Friesz said of her future home after recently signing the lease and putting down a $3,700 deposit. “I probably wouldn’t have even rented it if there were another option.”

Friesz is perhaps one of the more desperate renters in today’s market. But she’s hardly alone.

With apartment vacancies at a 22-year low, Southern Californians shopping for a rental over the past few months faced limited options and rapidly escalating rents as the apartment market rebounds from the pandemic.

A Southern California News Group composite from three rental indexes shows the asking rent for a vacant unit in L.A. County jumped an average 10% from a year ago during the fourth quarter of 2021, snapping a 12-month lull that pushed L.A. rents down during the pandemic.

The same composite showed Orange County asking rents rose an average 18% during the fourth quarter, and Inland Empire rents were up 17%.

Vacancy rates, meanwhile, fell to the lowest level last spring in CoStar records dating back to 2000, and to their lowest levels in RealPage and Moody’s-Reis records dating back to 2010. Vacancies were only slightly higher in the fourth quarter, averaging 3.3% in L.A. County, 2.2% in Orange County and 2.3% in the Inland Empire, composite data shows.

“There is just nothing available,” said Richard Green, director of USC’s Lusk Center for Real Estate. “When you’re looking at 2% vacancy or 2.5% vacancy, that’s basically zero.”

As a general rule, rents are expected to drop when vacancies are above 5% and go up when they’re below 5%.

Now, the rents are climbing again.

Composite numbers from the three rental indexes show Orange County’s average rent at the tail end of 2021 was $2,432 a month, or $368 a month more than in the fourth quarter of 2020.

“Rents fell a lot (in L.A. County) at the beginning of the pandemic,” Green said. “But they’ve not only caught up, they’ve more than caught up. And in particular, in O.C., they’ve just gone gangbusters.”

Those are the biggest one-year gains in the composite index dating at least to 2011.

Health care worker Randy Furbush saw the impact of those hikes firsthand while shopping for an apartment in recent months. He was looking for an affordable rental close to his job in Orange County. He couldn’t find one.

“The prices were extremely expensive,” he said.

“It was somewhat hard,” Furbush, 24, said of his apartment search. “I guess you had to make some sacrifices.”

Randy Furbush, 24, stands in the living room of his one-bedroom apartment in Homecoming at the Preserve in Chino on Tuesday, Feb. 8, 2022. Furbush has recently moved into his apartment in Chino after failing to find affordable housing in Orange County where he works in healthcare. (Photo by Watchara Phomicinda, The Press-Enterprise/SCNG)

Members of the Apartment Association of Greater Los Angeles, made up mainly of owners with fewer than 10 properties, say that while L.A. County rents have indeed rebounded during the past six months, they have yet to catch up to March 2020 lease rates.

“Our vacancies are down, definitely down, but our rents are not at pre-pandemic levels,” said Matt Williams, principal for Williams Real Estate Advisors, which manages 650 units in Los Angeles, primarily in small buildings.

While there is no up-to-date data for small buildings and mom and pop owners, Williams said one-bedroom apartments in West Hollywood have gone from $2,600 a month pre-COVID to $2,199 with one month’s free rent.

The pandemic continues to dog the rental market, with a number of smaller landlords still hurting financially from eviction bans that left apartments occupied by non-paying tenants, association members say.

The pandemic had an inverse impact on coastal and inland rental markets, driving work-from-home employees from high-cost job centers in L.A. and Orange counties to cheaper, more spacious rentals in the Inland Empire.

“Employers are getting their employees to come back to work. People who may have migrated out of these urban areas are probably coming back,” said Daniel Yukelson, executive director of the Apartment Association of Greater Los Angeles.

Green said there’s little data to confirm the trend definitively, but he agreed demand is returning in L.A.

The effects of eviction moratoriums still linger as well. Although the statewide eviction ban ended on Sept. 30, tenants who applied for rent relief can’t be evicted through March. And the Board of Supervisors extended L.A. County’s moratorium through next December.

“There’s a lot of owners with vacant units who (were) reluctant to rent” during the moratorium,Yukelson said.

Some Southern California tenants may be staying put because they can’t find anything as cheap as they’re now paying, said Randall Lewis, senior executive vice president for marketing at the Upland-based Lewis Group of Companies, which manages 13,000 apartments.

“In our properties, there are fewer tenants moving during the pandemic,” Lewis said. “During normal occupancy, we see 50% to 60% of tenants renew leases. Now, 60% to 70% are staying.”

“It takes longer to finish stuff. So if you look at the time between a place being permitted and a place being available for occupancy, the lag times seem to be getting longer,” Green said. “Which means stuff that normally would be available is not available.”

Because of the rental shortage, Victoria Bautista is worried she and her husband won’t find a place of their own before their baby is born in May.

The couple, who have been living with Bautista’s in-laws in Chino Hills, has been shopping for a home in the $2,600- to $2,800-a-month range since November. They’ve looked at more than 15 properties and applied to at least a dozen rentals. They keep losing out, however. Their real estate agent believes they’re competing with overqualified renters with higher incomes.

“It’s a no-brainer for the landlord because they choose the one with a higher income,” said Bautista, 25, who works as a school speech pathology assistant. “We’ve been looking for a small, three-bedroom house or condo or townhome. We may now have to look for a two-bedroom apartment because it’s been so hard to get in.”

Their goal was to rent in Chino, Ontario or Eastvale to be close to family and their church. Now, they’re looking in Rancho Cucamonga and Riverside as well.

“We want to be close to family and friends when we have our baby. (But our applications) are not being accepted,” she said. “I tell my friends you need five months if you want to find a place.”

Friesz, meanwhile, is getting ready to move into her new duplex in Huntington Beach, cleaning out the garage. As she worked, passersby asked her if the unit was available.

“At least six people have stopped by because there’s nothing out there,” she said.

You can view the original article here.