Home » About » News » Los Angeles Times: California rents are spiking - and in places you might not expect. 'I was in shock'

Los Angeles Times: California rents are spiking - and in places you might not expect. 'I was in shock' 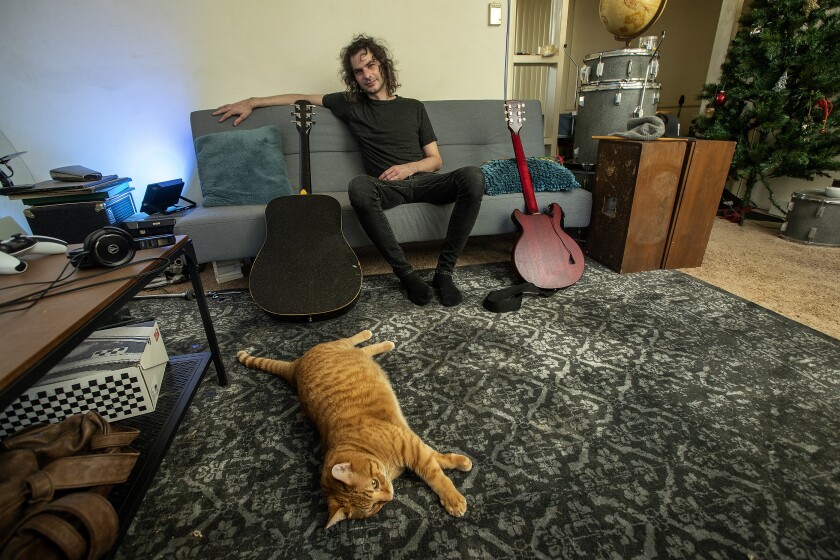 When Santa Monica resident Rob Leonard got a notice telling him that rent for his one-bedroom apartment would go up $100 a month starting in September, he had to read the letter several times because he thought there was a mistake.

“I was in shock,” he said. “Twelve hundred dollars a year — that’s people’s grocery money. That’s gas. I have a cat, so that’s cat food, cat litter, or one vet visit could amount to $1,200. I generally live within my means, but it just means I’m going to have to work even harder and grind more.”

Leonard moved to the beachfront city in June 2013 from South L.A. and started out paying $1,450 a month. His rent has gone up slightly every year, but the latest hike — a new monthly payment of $1,764 — is the largest bump in nine years.

“At the time, I was like, this is more expensive than I’m used to, but now that I look back, I can’t afford to move out anywhere else,” he said. “Even in [Koreatown], the rent is crazy high compared to what I’m paying at my place.”

Of the most expensive places for renters in the U.S., three California cities are in the top five, according to a recent report by the listing portal Rent. But they aren’t where you’d expect.

After Jersey City, N.J., and Boston, Palo Alto is the third-most-expensive city for rentals in the United States, followed by Glendale and Santa Monica. San Diego is ninth on the list, while Newport Beach came in at 10th. Los Angeles and San Francisco are in the next tier, at 12th and 13th, respectively.

The list was compiled from data from Rent’s multifamily rental property inventory for one- or two-bedroom units between June 2021 and June 2022. The data capture only the company’s own listings, not totals for the overall rental markets, which are likely lower. Yet the findings have generated notice and underscore the growing housing affordability crisis.

At the height of the pandemic, as people relocated from major cities, rental prices dipped everywhere, according to Jon Leckie, a data journalist for Rent. The rental market stayed depressed for about a year before experiencing a steep rise around August or September 2021.

“At one point in the middle of the pandemic, Oakland overtook San Francisco in average rent prices,” Leckie said. “That shows that people said, ‘Let’s get out of the city center into something that’s not too far away.’ You could still go to the office, but you’re far enough away that you get away from the city center and don’t have to deal with crowds of people.”

Data from the Bureau of Labor Statistics’ consumer price index for the Los Angeles area showed that in April, housing costs were up 5.4% from the year before and renters were spending 3.7% more for their primary residence compared with April 2021.

Online searches for “rent increases” have been rising, with Californians leading the way in the last week, according to Google Trends data.

But rent surges aren’t unique to the Golden State. According to the CPI for urban customers, the rent index increased 0.8% in June across 75 U.S. urban areas, the largest monthly increase since April 1986. The CPI was calculated using monthly prices for 6,000 housing units and 22,000 retail establishments.

Housing prices also have jumped. According to the California Assn. of Realtors, the statewide median home price is $863,790, up 5.4% from June of last year.

Because of soaring home prices, some buyers are deciding to sell but not purchase another house until prices deflate, Leckie said.

“When mortgage rates go up, that makes the cost of buying a home more expensive and people decide that it’s too expensive now and I’m going to wait until it comes back down [and] that makes the rent prices go up,” he said.

In Glendale, the most expensive Southern California city on the list, the average rent is $4,472 per month — a 36.32% increase from 2021, according to the Rent report. The data did not specify what size unit was being rented at that price.

Although the city doesn’t have a rent control law, it passed a right-to-lease ordinance in 2019 that requires landlords to offer a one-year lease and to pay relocation costs if rent is raised more than 7% and a tenant has to move out as a result. The relocation costs depend on how many units a building has and how long the tenant has lived there. Properties with two units or fewer are exempt from the ordinance.

“I’m hearing from tenants that they’re seeing their rents go up and it’s coinciding with the eviction moratorium expiring,” she said. “Rent increased more than 10% in Glendale. Tenants come to us asking if there’s a law helping [them] and we have to say, ‘No there isn’t.’”

Mike Van Gorder, a former member of the Glendale Tenants Union who ran for City Council in 2017, said construction of new luxury apartments is one reason for the lack of affordable housing in the city.

Van Gorder said he was priced out and had to move to a house in Burbank with his wife and newborn son in April. He had been living in an apartment for $1,500 a month, but his family needed a three-bedroom home after their son was born and couldn’t find anything for less than $1 million in Glendale.

“I love that city,” he said. “I wish I was still there, but there weren’t housing options appropriate for my family.”

He said more than a dozen affordable housing units were torn down to build a parking lot for Glendale Community College’s Garfield campus.

“If people want their kids to be able to earn their own independence, then at some point, you’re going to have to prioritize creating new options on your streets,” he said. “Each suburb needs to have lower-income apartment buildings because otherwise, we’re going to end up in a scenario where the only people buying houses are private equity firms. That’s already happening. People aren’t owning the homes that are being sold right now.”

“The demand for it is fairly obvious,” he said.

n Santa Monica, a burgeoning tech hub outside Silicon Valley, Green said a boom in jobs coupled with inadequate housing has resulted in stagnant population growth. The city’s average rent is $4,357 — up more than 15% compared with last year, according to the Rent report.

“Essentially, without substantial rezoning, Santa Monica will never come close to meeting the demand for housing there,” he said. “If you go north of Montana [Avenue], everything is a huge single-family lot, which means they’re not absorbing this demand.”

The city’s composition of renters compared with homeowners also may have put Santa Monica high on the list, according to Paavo Monkkonen, professor of urban planning and public policy at UCLA.

“Why is Santa Monica more expensive than Beverly Hills for renters? It may be the case that Beverly Hills has extremely expensive properties, but it’s owner-occupied and their rental properties are small and older,” he said. “If you have two cities where the demand for living in the city is similar, but city A has newer, larger rental units, then the rent’s going to be higher there because of that.”

While the pandemic allowed some privileged households to move to regions with cheaper rents and more space, Santa Monica Rent Control Board member Anastasia Foster said residents there did not have the same ability to relocate and work remotely.

Although the city adopted rent control in 1979, Foster said the Costa-Hawkins Rental Housing Act takes the teeth out of the measure. The 1995 law bars rent control on condos, single-family homes and buildings built after 1995 and prohibits “vacancy control,” allowing landlords to raise the rent to any price for a new tenant after the previous one moves out. More than 70% of the city’s residents are renters.

“Tenants often face a dilemma in that it’s really hard to make a lateral move,” she said. “If you moved into the city when you were young and now you’ve partnered up or got married or had a child or started a business, you may have to size up. But it’s really hard to give up the price you’ve had under rent control and move into a vacancy-decontrolled two-bedroom.”

Renters tend to stay in their units long term, which can motivate some landlords to push longtime tenants out in order to get a bigger return on their investment with a new renter, Foster said. In Santa Monica, more than 70% of the city’s rent-controlled units are at or above market rate, leaving about 23% of the units to tenants who have been living in them long term, she said.

“Those are the tenants more vulnerable to harassment and pressures,” she said. “There are renovations going on around their heads, removal of amenities in an effort to make them leave. Some methods are more subtle, and some are more egregious.”

If Leonard were to move out of his Santa Monica apartment, he said, his unit would rent for $500 to $600 more per month for a new tenant.

In the decade he’s lived in the city, Leonard has seen the number of homeless people increase and a decline in small business and mom-and-pop stores amid soaring commercial rent.

“You have developers building luxury condos and telling residents it’s going to create competition and drive prices down, but all I see are cookie-cutter one-bedrooms going for $4,500 a month,” he said. “There are a lot of ugly buildings being built and a lot less skyline to see in certain parts of town.”

Foster explained that Southern California’s idyllic weather — and, in particular, Santa Monica’s proximity to the beach — have drawn tourists and prospective renters alike, driving the prices to exorbitant heights.

“Why do we have among the highest rents in the nation and the state?” she said. “It’s because it’s a damn good place to live, and the ground underneath our feet is made of gold.”

The original article can be found here.