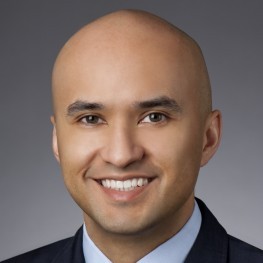 Alfred Fraijo is a partner in the Real Estate, Land Use and Natural Resources practice group in the firm's Los Angeles office. He is a leader of the firm's Latin America Practice Group, a global initiative to provide specialized legal representation to Hispanic/Latino-owned companies and companies focused on the U.S. Latino market.

Mr. Fraijo grows his expertise on cutting edge real estate transactions for public, private and nonprofit developers and multinational corporations in the United States and abroad. He recently was featured in "Newsmakers" by the Los Angeles Business Journal.

Mr. Fraijo has significant experience in obtaining and negotiating land use entitlements for complex housing and mixed use development projects throughout California, including advising clients with innovative, urban renewal projects in the inner-city and other sectors with emerging markets. His real estate and land use expertise extends to transmission towers permitting, green energy facilities development and permitting educational campuses for charter schools.

Mr. Fraijo has served on numerous real estate associations and organizations focused on urban renewal issues and civic empowerment. Mr. Fraijo is the founder and Chairman of the Los Angeles Urban Renewal Network, Inc., a multi-disciplinary collaborative of young professionals engaged in policy and sustainable development to improve the quality of housing in Southern California. He serves as Vice President on the Board of Directors for the Friends of the Hollywood Freeway Central Park, Inc. Mr. Fraijo also advises several non-profit housing development corporations, including as Board member of California Community Builders, Inc. and Chairman of the East LA Community Corporation. Mr. Fraijo is a Founding Board member of Honor PAC and For People of Color, Inc., a nonprofit organization dedicated to growing diversity in the legal profession.

Mr. Fraijo continues to speak for professional associations and continuing education symposia and has published articles on emerging trends in state and federal land use and environmental law as well as on environmental justice issues. Mr. Fraijo is admitted to practice in California and the District of Columbia. He is a member of the American Bar Association, the State Bar of California, the State Bar of Washington, D.C., the San Francisco Bar Association, the Los Angeles Bar Association, and the Mexican American Bar Association. Mr. Fraijo received his J.D. from Loyola Law School, Los Angeles in 2002, where he was a full tuition scholarship recipient and member of the nationally ranked National Hispanic Moot Court Team from 2001 to 2002. In 1999, he graduated cum laude from Harvard University and received a B.A. in Government. Prior to Loyola and Harvard, Mr. Fraijo participated in an accelerated engineering program at the Massachusetts Institute of Technology and traveled as a student ambassador to Japan and South Korea.