Home » About » News » The New York Times: When Your Second Home Is the First One You Buy

The New York Times: When Your Second Home Is the First One You Buy

Some hopeful homeowners are keeping their rentals in pricey, urban areas, but are buying second homes in more affordable, rural and suburban locations. 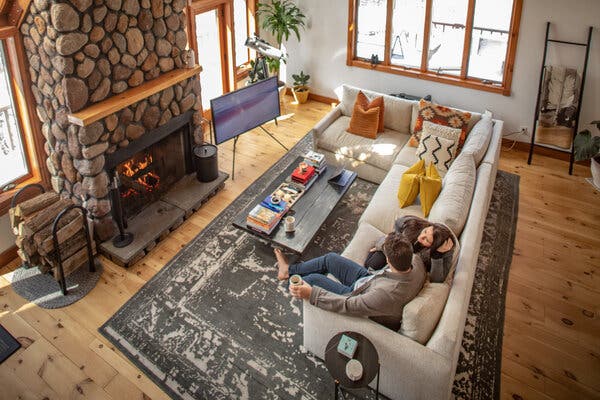 Dylan Beaumont, 33, and Susanah Zeffiro, 32, bought a home in the Catskills, pivoting from their original plan to buy a place in the city prepandemic.

Lillie Walsh Dudley and Andy Dudley wanted to be homeowners. The couple, who have a 5-year-old son, had been renting in South Slope since 2014. They began looking for something to buy about three years ago.

“Even though we’re not rolling in money, we had a little bit of savings,” said Ms. Dudley, 41, who works in book publishing, as does Mr. Dudley, 45. Still, not enough to buy in Brooklyn. “Anything we could possibly afford would be a stretch and a downgrade from our rental.”

Then the pandemic hit, and their apartment suddenly felt small and the city itself felt claustrophobic. The couple decided to try another house hunt.

This time, instead of looking in Brooklyn, they looked farther out — much farther. Their plan: Keep their rental and buy a second home about three hours away in the Catskills. In August 2020, they paid $221,000 for a move-in ready, 100-year-old house in Roxbury, N.Y.

A growing number of first-time buyers are doing what the Dudleys did — purchasing a second home while renting their main residence. Though there isn’t data to track this trend, real estate agents and industry observers say a combination of rapidly rising home prices and pandemic work-from-home flexibility has prompted some hopeful homeowners to skip the first step — owning a primary home — and go straight to buying a second home in a more affordable location. 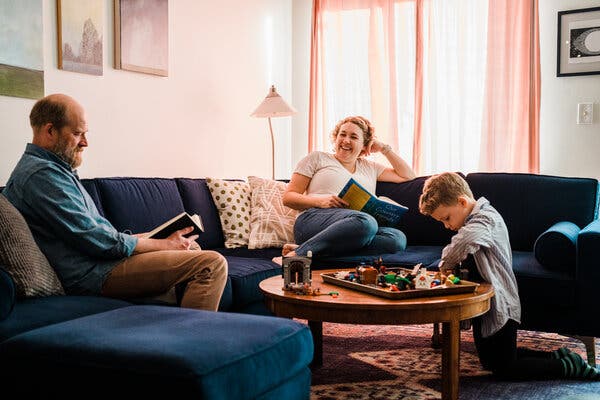 Andy Dudley, 45, and Lillie Walsh Dudley, 41, with their 5-year-old son in their rental apartment in Brooklyn. 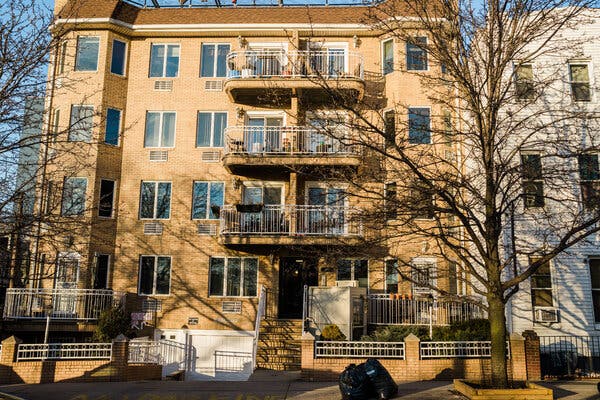 When the pandemic hit, the Dudleys’ place in South Slope felt small and claustrophobic, but they knew they couldn’t afford to buy a larger home in the city. 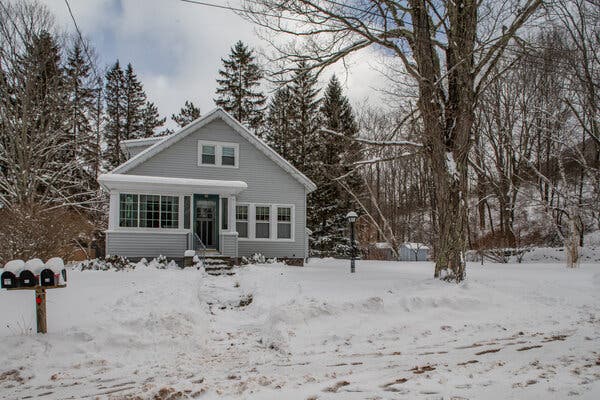 They expanded their search outside the city and found a house in the Catskills, about three hours away. They are keeping their rental in Brooklyn 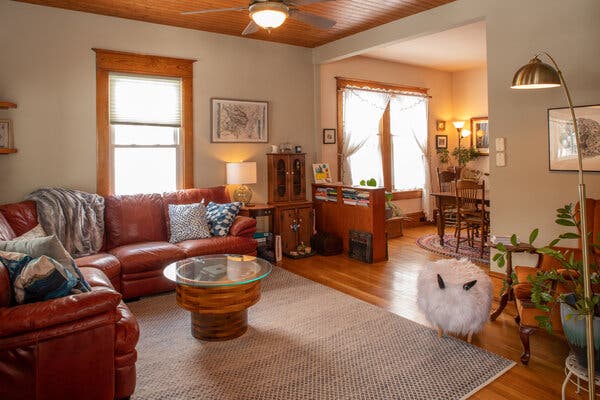 Vacation home purchases in general boomed during the pandemic. In 2020, loan applications for vacation homes were up 30 percent from 2019, according to the most recently available data from the Home Mortgage Disclosure Act. Zillow, the real estate website, looked at homes for sale in vacation and weekend destinations, and in January 2019 a quarter of those markets had more page views per home than typical markets. By January 2022, half of them did.

Historically low interest rates and an unpredictable stock market have made real estate an appealing investment category during the last few years, said Richard K. Green, the director of the University of Southern California Lusk Center for Real Estate. But rapid price appreciation has put homeownership out of reach for buyers who don’t already have equity in the market or very high income, particularly in already-pricey metro areas like New York and Los Angeles.

Indeed first-time homeownership nationwide has been falling dramatically. In 2009, first-timers made up 45 percent of the home-buying market, but by January 2022 they represented just 27 percent, according to the National Association of Realtors. And with median home prices up 13.7% from a year ago, the challenges are mounting.

“Even if you’re being paid really well, accumulating a down payment for a million-dollar house is really hard,” Mr. Green said. “But you want to own somewhere, you want to get into the market.” 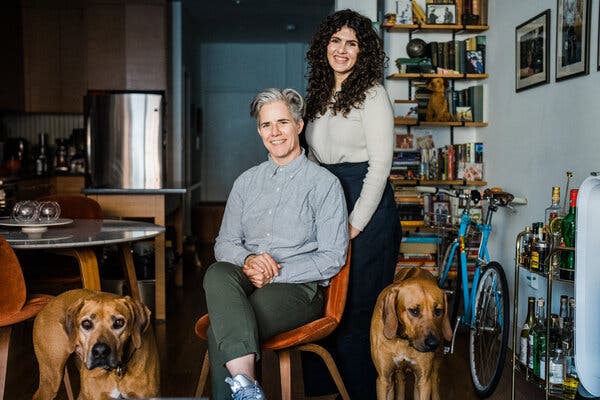 Virginia Alber-Glanstaetten, 51, and Becky Goodman, 35, in their apartment in Dumbo, Brooklyn. They bought and are fixing up a second home in North Truro, Mass., which will give them a vacation escape as well as investment income.Credit...

Which is why some first-timers are getting creative. Virginia Alber-Glanstaetten, 51, and Becky Goodman, 35, who are renters in Dumbo, said Covid-era lifestyle changes, including remote work, prompted them to buy their first home together near Provincetown, Mass., where they have vacationed for years. Their budget of $800,000 for a primary home wouldn’t have gotten them much more space than they already had in Brooklyn, they said. But on Cape Cod, where they bought, there were more options within their budget, which was about $600,000 after setting aside enough to keep paying rent in Brooklyn.

The home they bought had long ago been converted from a single family into three separate units, which was part of the appeal. The couple plans to stay in one of the units while renting out the others as investment income. With their jobs still partially remote, they have been spending weeks at a time in Cape Cod, while keeping their rental as a home base closer to friends and work. (Ms. Goodman works in human resources and Ms. Alber-Glanstaetten works in health care advertising strategy.)

The appeal of living in multiple places has grown in recent years with an increase in “nomadic” living, says Austin Allison, the chief executive and co-founder of Pacaso, a company that sells a fractional ownership model for second homes, allowing buyers to purchase a share of a home to use occasionally. “We see a growing cohort of people who might buy four shares of four homes around the world,” he said.

Some say it’s like having the best of both worlds. “The Cape Cod house has become this really beautiful escape,” said Ms. Goodman. “And we like having our resident footprint here in the city and doing the things we love here.” 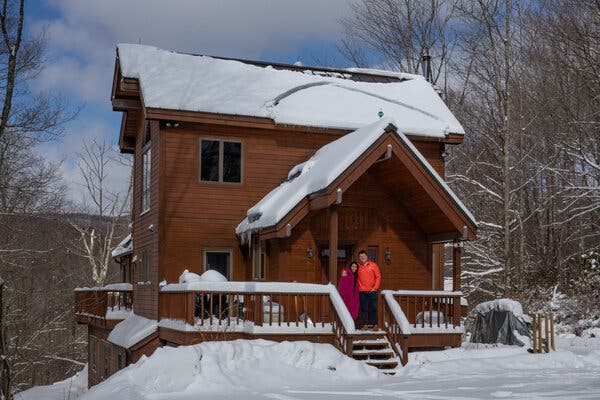 Ms. Zeffiro, 32, and Mr. Beaumont, 33, posed outside their home in the Catskills. 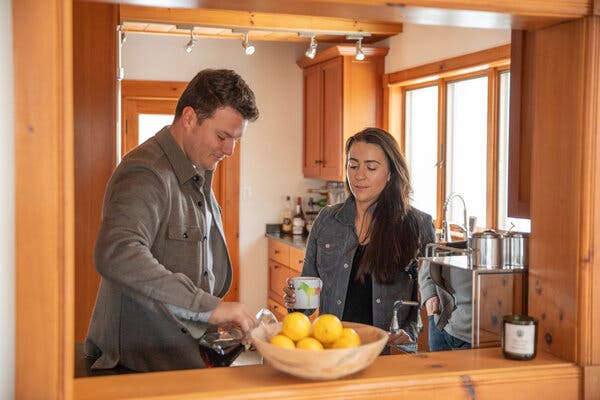 The couple remain renters in Manhattan. 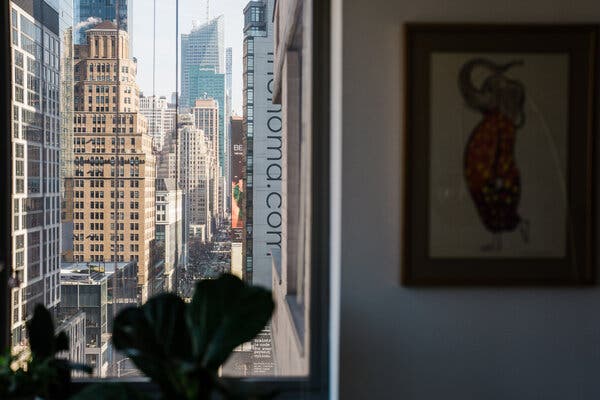 Ms. Zeffiro and Mr. Beaumont have a view of the Manhattan skyline from their rental. 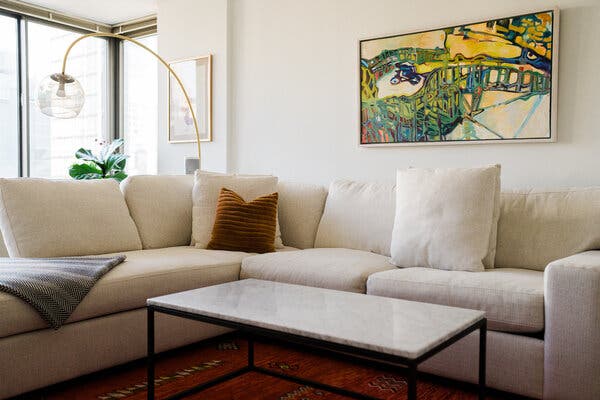 The couple’s jobs require them to be in the city periodically.Credit.

Dylan Beaumont, 33, who owns a house in the Catskills and rents in Manhattan, put it this way: “If I’m up here for a week or a week and a half, it’s like, ‘I want to go to the city and get Thai food and see some friends,’” he said. “Then you get sick of the city, and you come up here and go hiking.” He and his fiancée, Susanah Zeffiro, 32, purchased in Margaretville, N.Y., in August 2020, pivoting from their original, prepandemic plan to buy a place in the city.

They paid $565,000 for the Catskills home and have spent more time there than they initially thought they would, with the prolonged nature of the pandemic. Mr. Beaumont and Ms. Zeffiro’s jobs in advertising are still partially remote, but they often have to meet with clients in the city or travel for work. “I love the balance,” Mr. Beaumont said.

But first-time buyers can face unique challenges when it comes to owning a home in a rural location, especially those more used to apartment living. Mr. Beaumont’s house is on about 20 acres and, at one point, he and Ms. Zeffiro discovered there was an underground oil tank on the property, which they had to have removed — a problem that would not have come up had they bought a condo in Manhattan.

Ms. Alber-Glanstaetten and Ms. Goodman described their Cape Cod house as “ramshackle with a vision.” Renovations are ongoing, which means they often have to travel last-minute for contractor meetings and troubleshooting. “As first-time buyers we had no idea what we were getting into,” said Ms. Alber-Glanstaetten. 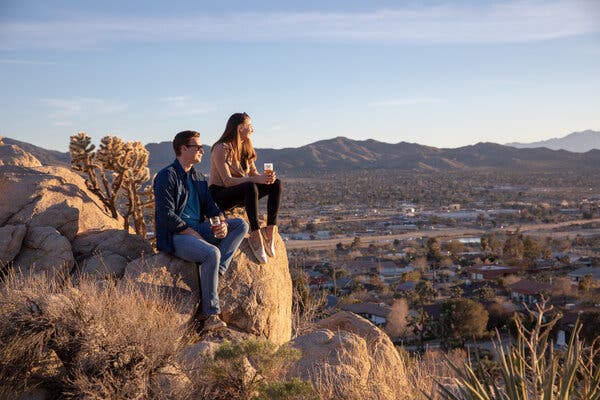 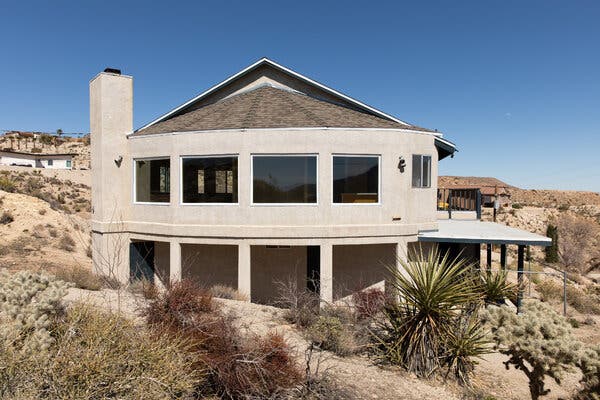 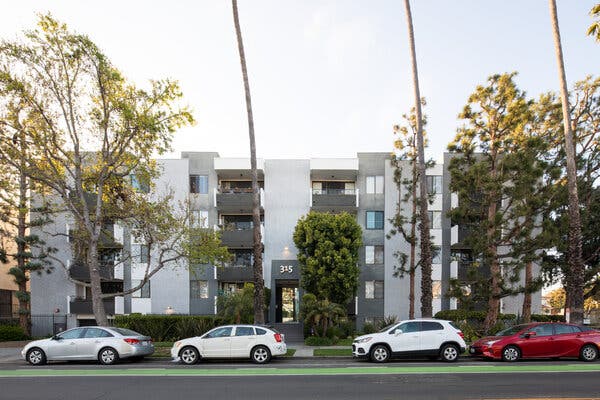 They still live in their apartment in Santa Monica, where, according to Realtor.com, the median price of a home is $1.9 million.Credit... 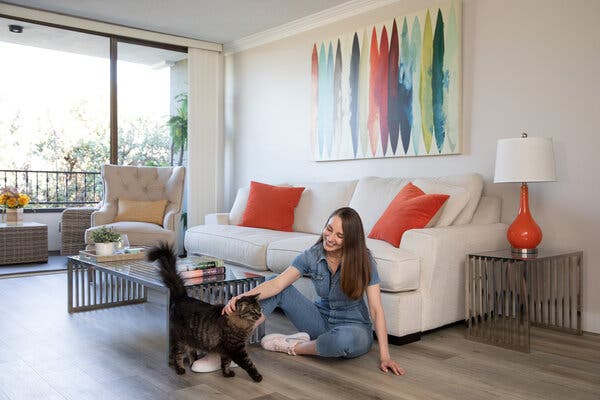 Although the cost of buying in a rural area can be significantly lower than in the city, the pandemic buying spree has meant competition has been fierce. Last year, first-time buyers Anna Lewkowska and Alex McKean bought a second home in Yucca Valley, Calif., near Joshua Tree National Park. They put in offers on three different houses before landing the winning bid on a two-bedroom, one-and-a-half bathroom house with about 2,000 square feet and panoramic views. They paid $517,000 — more than $120,000 over the list price.

That’s still a fraction of what it would have cost them to own a home in Santa Monica, where the median price today is $1.9 million, according to Realtor.com. Ms. Lewkowska, 31, who owns a talent management business, and Mr. McKean, 32, who works in product management for a pipe manufacturing company, said they love where they live near the beach in Santa Monica, but they knew homeownership was not affordable there. “We know that real estate is a great investment,” said Ms. Lewkowska. “But here in Los Angeles, it’s extremely expensive.”

They’ve spent the past year going back and forth between the two places while renovating the Yucca Valley property, doing some of the work themselves. They’ve dubbed the house the Mandarin Escape and describe the design style as “modern retro” with gold fixtures and a sunset, ‘70s color theme. The plan is to rent it out on Airbnb, starting later this spring. Ms. Lewkowska said they think they can charge between $250 and $1,000 a night, depending on the season. “It was the basic economics of it, for us,” Mr. McKean said.

Other first-timers are buying second homes now with the idea of moving into them later on. Jackie Puerta, a 48-year-old ultrasound technician who lives in North Bergen, N.J., said she became enamored with Miami in the ’80s watching “Miami Vice,” the TV show. Earlier this year, she bought a 16th-floor condo in Miami’s Edgewater neighborhood for $310,000. She spent the first few weeks staying at the condo on an air mattress. “Just to wake up to that view, it was all worth it,” she said.

Though her job is in New York, she plans to move to Florida within the next two years. Until then, she’s renting the place to long-term tenants to cover her mortgage and other monthly expenses. “I’m very surprised that I pulled this off,” she said. “I always wanted to do it.”

One unexpected benefit of such arrangements? First-time second-home buyers say it can reaffirm how convenient rental life can be. “It’s opened my eyes to what a luxury renting is,” said Mr. Beaumont. “It’s like, hey, my washing machine is broken. And a person just comes and fixes it.”

Ms. Dudley, the Park Slope renter who owns a Catskills house, said one of the things they like about their arrangement is that they didn’t have to leave her landlady, who Ms. Dudley described as a “gem of a human” who takes great care of their apartment and has never raised the rent. 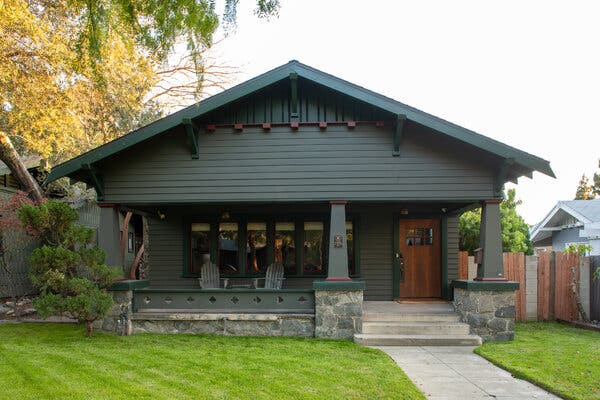 Abbey Londer and Ahmed Bharoocha recently bought a primary home in Monrovia, Calif., just outside of Los Angeles, by taking out a home equity line of credit on a house they own in Big Bear, Calif.Credit... 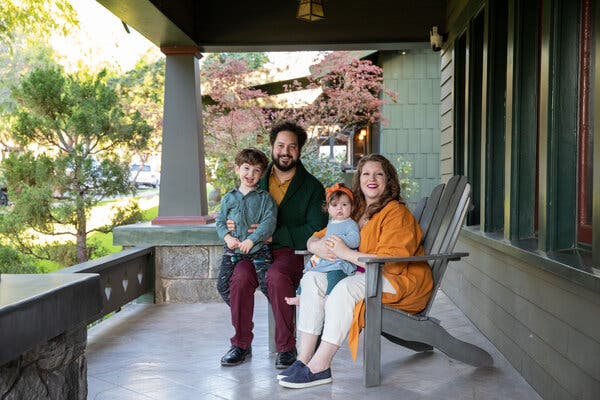 The couple sat on the porch of their new home with their children.Credit... 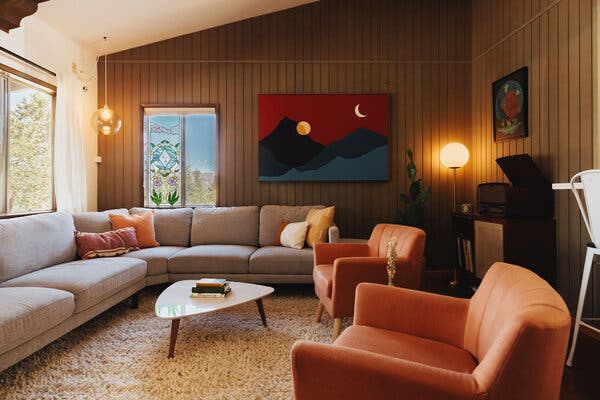 “Buying that house in Big Bear was a life-changing thing for us,” Ms. Londer said. 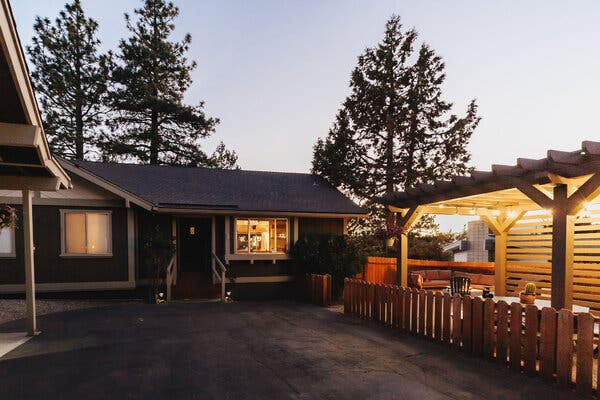 The house in Big Bear rents for between $350 and $950 a night, depending on the season. That came in handy during the pandemic.

Though there’s no guarantee, some have used the equity they’ve built in their second home to purchase a primary home. Abbey Londer, 36, and Ahmed Bharoocha, 38, recently took out a home equity line of credit on a house they own in Big Bear, Calif., to buy a primary home in Monrovia, Calif., just outside of Los Angeles. “I never really imagined I’d ever be able to own anything in L.A. proper,” said Ms. Londer. In 2019, the longtime renters paid $425,000 for a three-bedroom, two-bathroom house in Big Bear, about two hours away. The house rents for between $350 and $950 a night, depending on the season, according to Ms. Londer. That income came in handy during the beginning of the pandemic, when her job in live events and her husband’s work as an actor and stand-up comedian dried up for several months.

You can view the original article here.