Senate Bill 9's proponents have touted it as one of multiple strategies to solve the state's ongoing housing crisis, while opponents argue it strips local control from cities. 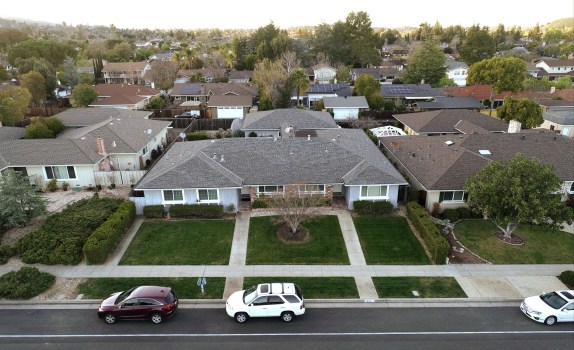 Senate Bill 9, promoted by Senate leader Toni Atkins and supported by Assembly Speaker Anthony Rendon, both Democrats, was signed into law by Gov. Gavin Newsom. It allows most homeowners to build two homes or a duplex on a plot zoned for a single house, and in some cases, split their lot and build two additional homes, starting on Jan. 1.(Nhat V. Meyer/Bay Area News Group)

The bill, enacted on Jan. 1, allows single-family home owners to split their lots into duplexes, with up to two separate units on each, with ministerial city approval — meaning local governments cannot deny an application unless it presents a “specific, adverse impact” to public health and safety or the environment.

The bill’s proponents have touted it as one of multiple strategies to solve the state’s ongoing housing crisis, while opponents argue it strips local control from cities.

“SB 9 will open up opportunities for homeowners to help ease our state’s housing shortage, while still protecting tenants from displacement,” said Senate President Pro Tem Toni G. Atkins, D-San Diego, who authored the bill. “And it will help our communities welcome new families to the neighborhood and enable more folks to set foot on the path to buying their first home.”

Carson — along with Torrance and Redondo Beach, who have joined the legal effort to render SB 9 invalid — intend to argue in court that the law violates the California Constitution by removing local control over land-use and failing to specifically tailor the bill’s provisions to address the state’s housing crisis, said Carson City Attorney Sunny Soltani, who announced the action last week.

Rather than allowing local governments to address the housing crisis in a manner that best suits their communities’ needs, Soltani said, the state has enacted a “one size fits all” approach that strips local cities of necessary development authority.

The plaintiffs for the lawsuit, which Soltani said will be filed sometime this week, will be several South Bay charter cities.

In California, cities that have not enacted their own charter — essentially a local constitution — are governed by general state law. Conversely, charter cities establish their own set of hyper-local governance rules that often differ from general law.

A second legal challenge to SB 9 — involving general law cities, including Rancho Palos Verdes and Hesperia — is also in the works, Soltani said.

In a draft complaint shared with the Southern California News Group, Soltani argued that SB 9 violates the California Constitution’s legal designation for charter cities — which says such cities are specifically authorized to self-govern matters of municipal affairs.

“It is undisputed that planning and zoning laws are matters of municipal affairs,” the draft complaint said. “In enacting SB 9 in 2021, the State of California eviscerated a city’s local control over land-use decisions and a community-tailored zoning process.”

SB 9 does include certain protections, though.

Single-family homeowners who wish to “upzone” their property must continue living on-site for a minimum of three years after lot-splitting — a deterrent to any large developers looking for new investment opportunities.

The bill protects residents as well.

Properties with active tenants in the past three years, for example, are excluded from ministerial lot-spitting approval under SB 9, meaning that profiteers are not permitted to buy up single-family lots for development and evict or displace current residents.

What’s different, though, is that homeowners who initiate the development process do not have to undergo environmental impact evaluations.

“Although SB 9 allows a city to deny a project that would have specific adverse impacts” to public health and safety, Soltani’s draft complaint said, “there are many environmental and community concerns that are not considered “objective public health or safety concerns.”

Local ordinances, like those that preserve trees, views, bike paths or open space, Soltani said, do not rise to SB 9’s definition of a public health or safety concern — but have a significant impact on a community’s overall health.

Another argument against SB 9 is that it doesn’t address affordable housing concerns specifically enough to warrant the state’s “usurping” of local control, Soltani wrote in the draft complaint.

“SB 9 cites the lack of affordable housing as a matter of statewide concern, but the bill does not require the newly created homes to have any affordability covenants or to be restricted to lower-income households,” the draft complaint said. “SB 9 housing developments could be sold or leased at market rate prices, which would do nothing to address housing affordability, and could exacerbate unaffordability by taking away potential affordable housing locations.”

Proponents of SB 9, on the other hand, argue that the bill creates a statewide path for local homeowners to establish multi-generational equity and will create necessary new housing locations for Californians, who would normally be priced out of the market.

“At a time when many Californians are experiencing economic insecurity caused by the pandemic, this bill will generate affordable rental units,” California YIMBY — Yes In My Back Yard — wrote in a statement about SB 9. “It also provides flexibility for multigenerational housing by allowing homeowners to build a modest unit on their property so that their aging parent or adult child can have an affordable place to live.”

What distinguishes SB 9’s provisions from similar housing-focused legislation, though, is that home-owners who decide to split their lot can actually sell the new unit, instead of just renting it out.

“In doing so, SB 9 could open up new homeownership opportunities at more attainable price points for prospective purchasers, who would be able to apply for a traditional mortgage to buy the home,” UC Berkeley researchers wrote in a recent study of the bill’s potential impacts on the California housing crisis.

Berkeley’s study estimated that the redevelopment of 80% of California’s existing single-family homes would not be feasible under SB 9’s provisions. The study also approximated that the bill could catalyze the creation of 700,000 new market-feasible units over several years, a 40% increase in existing development potential across California’s single-family housing parcels.

The state needs approximately 1.8 million new housing units by 2025, according to the California Department of Housing and Community Development — that’s about 180,000 new units that need to be built each year to keep up with population growth and demand.

Currently, California only adds around 80,000 new housing units a year, according to that department.

“It’s a step toward making land-use regulation less exclusionary,” Green said. “We’re pushing out people who make less than $50,000 a year because they can’t afford to be here — and the reason for that is we don’t have enough housing.”

Duplexes and fourplexes, the type of lots permitted under SB 9, are cheaper to build than larger apartment complexes, Green added.

“You basically reduce the value of the cost of the land involved, which is critical here,” he said. “Land value is often a big part of the value of a house. So, if you split the lot and put in more units, you reduce the price and make it more accessible to lower-income people.”

Opponents, meanwhile, have another concern about SB 9: gentrification.

Redondo Beach Mayor Bill Brand, in an interview, said he was concerned over how the bill may negatively alter the composition of his city’s neighborhoods.

“It purports to address the affordability crisis in California, but unfortunately, it does anything but,” Brand said. “In fact, it will gentrify many communities of color and get in the way of our ability to try to get affordable housing all over the state.”

“We’re just trying to protect the nature and character of our neighborhoods,” Furey said. “We fear that SB 9 will have devastating effects on single-family residents’ neighborhoods.”

Generally speaking, gentrification refers to lower-income neighborhoods being bought up, developed and sold or rented out to occupants with much greater economic security than the original tenants.

SB 9, Green said, would do the opposite.

Green used his own neighborhood as an example: An upper-middle class area in Pasadena largely occupied by single-family lots and surrounded by highly-sought after amenities like nearby jobs and transit.

“My neighborhood can’t be gentrified — it’s already the gentry,” Green said. “What it (SB 9) will do is gently degentrify neighborhoods.”

The original article can be found here.